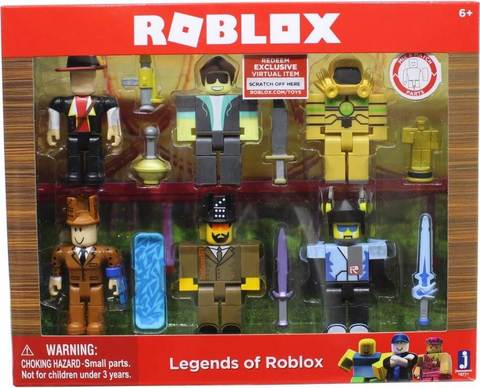 These creators are among the best of the best. Join these legendary developers on your own epic Roblox adventure!

Litozinnamon
Armed with his Bluster Buster, Litozinnamon is ready for combat! This accomplished StyLiS Studios game developer helped bring to life some of the most recognizable, award-winning games on Roblox, including Call of Robloxia 5 – Roblox at War and Phantom Forces.

Gusmanak
Adorned in gold and equipped with the legendary Dominus Aureus, Gusmanak is one of Roblox’s most elite developers. Winner of the Game Developer of the Year award in 2013, this founder of Dualpoint Interactive is most recognized by the community for designing Apocalypse Rising and Tiny Tanks.

Merely
Never one to miss a limited item, Merely has scoured the lands of Roblox for its most treasured possessions. Throughout his journey, he has collected the prized golden Domino Crown and many other rare items. Together with his twin brother, Seranok, Merely is well-known for being one of the most prolific Roblox developers out there. He created a place called Trade Hangout, where you can trade virtual items.

TheGamer101
After spending years honing his sword-fighting skills, TheGamer101 fears no warrior! It’s not in his personality to shy away from an epic battle, so he continues to train by battling stronger and more fearsome foes. He and his brother enjoy spending their time collecting limited items on Roblox, like the Black Iron Domino Crown.

Seranok
Long-time Roblox superstar and brother of Merely, Seranok was recognized as the community’s choice for Player of the Year in 2012. His Golden Chalice of Fame allows him to exude pure illustriousness wherever he roams, while his Rocket Jumper enables him to boost through the air at incredible speeds. His work on the game Catalog Heaven is widely acclaimed on Roblox.

Loleris
He makes games. Mad games. Loleris created some of the most popular games on Roblox, including The Mad Murderer, Darkness, and Intense Sword Fighting. He always carries around his Stunna Shades just in case he needs to leave the scene of an explosion in the coolest fashion.