C Programming in easy steps : Updated for the GNU Compiler version 6.3.0 and Windows 10 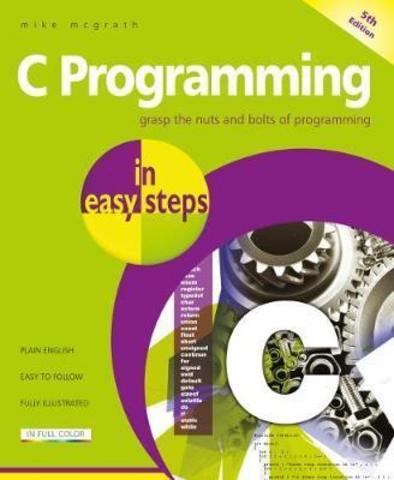 Publishing house: In Easy Steps Limited
Author: Mike McGrath
Available
Free delivery in Baku
0Add a comment
C Programming in easy steps, 5th edition has an easy-to-follow style that will appeal to anyone who wants to begin programming in C, from programmers moving from another programming language, to the student who is studying C programming at school or college, or to those seeking a career in computing who need a fundamental understanding of procedural programming. C Programming in easy steps, 5th edition begins by explaining how to download and install a free C compiler so that you can quickly begin to create your own executable programs by copying the book's examples. You need have no previous knowledge of any programming language so it's ideal for the newcomer to computer programming. Each chapter builds your knowledge of C. C Programming in easy steps, 5th edition contains separate chapters on the major features of the C language. There are complete example programs that demonstrate each aspect of C together with screenshots that illustrate the output when that program has been executed. The free, downloadable sample code provided via the In Easy Steps website all has coloured syntax-highlighting for clearer understanding. By the end of this book you will have gained a sound understanding of the C language and be able to write your own C programs and compile them into executable files that can be run on any compatible computer. Fully updated and revised since the fourth edition, which was published in April 2012 - now covers the GNU Compiler version 6.3.0 and Windows 10.
Article: 9781840788402
Genre: Programming & Scripting Languages: General
Publishing house: In Easy Steps Limited
Binding: Paperback
Weight, gr: 430,91
Author: Mike McGrath
Pages:: 192