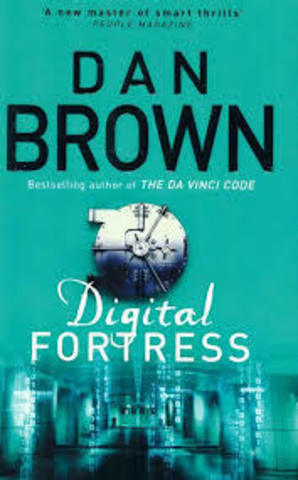 Publishing house: Corgi Books; Ireland / Export ed edition
Author: Dan Brown
Available
Worldwide, Baku and countrywide delivery! Free Baku delivery for orders over 30 azn! Free delivery to Azerbaijani regions for any orders!
ISBN: 9780552161251
0Add a comment
In most thrillers, "hardware" consists of big guns, airplanes, military vehicles, and weapons that make things explode. Dan Brown has written a thriller for those of us who like our hardware with disc drives and who rate our heroes by big brainpower rather than big firepower. It's an Internet user's spy novel where the good guys and bad guys struggle over secrets somewhat more intellectual than just where the secret formula is hidden--they have to gain understanding of what the secret formula actually is.

In this case, the secret formula is a new means of encryption, capable of changing the balance of international power. Part of the fun is that the book takes the reader along into an understanding of encryption technologies. You'll find yourself better understanding the political battles over such real-life technologies as the Clipper Chip and PGP (Pretty Good Privacy) software even though the book looks at the issues through the eyes of fiction.

Although there's enough globehopping in this book for James Bond, the real battleground is cyberspace, because that's where the "bomb" (or rather, the new encryption algorithm) will explode. Yes, there are a few flaws in the plot if you look too closely, but the cleverness and the sheer fun of it all more than make up for them. There are enough twists and turns to keep you guessing and a lot of high, gee-whiz-level information about encryption, code breaking, and the role they play in international politics. Set aside the whole afternoon and evening for it and have finger food on hand for supper--you may want to read this one straight through.