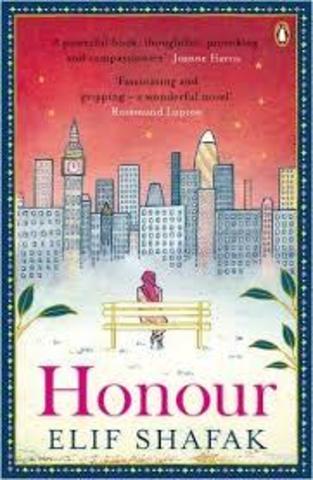 Worldwide, Baku and countrywide delivery! Free Baku delivery for orders over 30 azn! Free delivery to Azerbaijani regions for any orders!
ISBN: 9780241972946
0Add a comment
From the Orange Prize long-listed and award-winning author of The Forty Rules of Love and The Bastard of Istanbul Elif Shafak, Honour is a novel of love, betrayal and a clash of cultures. "A powerful book- thoughtful, provoking and compassionate". (Joanne Harris, author of Chocolat). 'My mother died twice. I promised myself I would not let her story be forgotten...' Leaving her twin sister behind, Pembe leaves Turkey for love - following her husband Adem to London. There the Topraks hope to make new lives for themselves and their children. Yet, no matter how far they travel, the traditions and beliefs the Topraks left behind stay with them - carried in the blood. Their eldest is the boy Iskender, who remembers Turkey and feels betrayal deeper than most. His sister is Esma, who is loyal and true despite the pain and heartache. And, lastly, Yunus, who was born in London, and is shy and different. Trapped by the mistakes of the past, the Toprak children find their lives shattered and transformed by a brutal act of murder...A powerful novel set in Turkey and London in the 1970s, Honour explores pain and loss, loyalty and betrayal, the trials of the immigrant, the clash of tradition and modernity, as well as the love and heartbreak that too often tears families apart. "Vivid storytelling ...that explores the darkest aspects of faith and love". (Sunday Telegraph). "Rich and wide as the Euphrates river along whose banks it begins and ends, Elif Shafak has woven with masterful care and compassion one immigrant family's heartbreaking story - a story nurtured in the terrible silences between men and women trying to grow within ancient ways, all the while growing past them. I loved this book". (Sarah Blake, author of The Postmistress). "[Elif Shafak] joins writers such as Hanif Kureishi, Zadie Smith, Monica Ali, Aamer Hussein, Andrea Levy, Hanan al-Shakyh and Leila Aboulela, who offer us fictional glimpses of London's Others". (The Independent). Elif Shafak is the acclaimed author of The Bastard of Istanbul and The Forty Rules of Love and is the most widely read female novelist in Turkey. Her work has been translated into more than thirty languages. She is a contributor for The Telegraph, Guardian and the New York Times and her TED talk on the politics of fiction has received 500 000 views since July 2010. She is married with two children and divides her time between Istanbul and London.