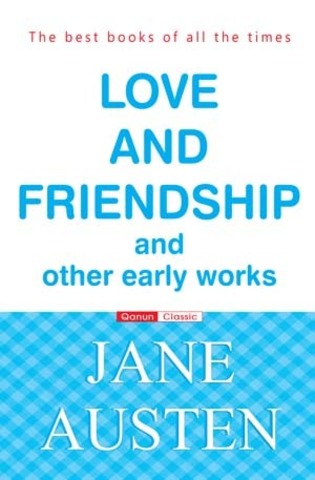 Begun when she was just eleven years old, Love and Friendship is one of Jane Austen's stories that very few readers may have encountered before.

Austen experts feel that this story was written, like many others, only for the pleasure of her family and friends. It is scribbled across three notebooks, in childish handwriting, and the complete work is thought to have been written over a period of six or seven years. It is dedicated to one of her cousins, whom she was very close to, Eliza de Feuillide. Eliza herself was an extremely colorful figure and is thought to have been the illegitimate daughter of the first Governor General of India, Warren Hastings. She was also a witness to the French Revolution where her husband, the self styled Comte de Feuillide was guillotined.

For the young Jane, these events must have been sheer inspiration to a writer's imagination. Love and Friendship takes the shape of an expostulatory novel. Written as a series of letters from Laura to a much younger Marianne who is her friend Isabel's daughter, it is meant to apprise the young and flighty Marianne about the dangers of infatuation and falling headlong into romantic love. The book offers an early and crucial insight into Jane Austen's style, her wonderful sense of humor and her take on contemporary society.

At times, she portrays events almost in parody form, at others, she is sharp and critical, but as always, the typical Jane Austen brand of gentle, sparkling wit is highly evident. She describes the concept of “sensibility” or what we would today call “sensitivity” or “sentimentality” and how it can be taken to ridiculous extremes. The deliberately twisted and complicated plot is replete with fainting fits, deaths due to a variety of causes, including “galloping consumption,” plenty of drama, elopements galore, unbelievable coincidences and wicked philanderers—all the elements that a typical potboiler of the era would contain.

Love and Friendship was written primarily for the amusement of her large and gregarious family, and young Jane was probably called upon to read her writings aloud. The reader can only imagine the sheer hilarity that the novel must have evoked. As part of a collection of Jane Austen Juvenilia, this is indeed a treasure trove for Jane Austen enthusiasts as it offers early glimpses of that brilliant talent which was to shine forth a few years later and delight readers of all ages.