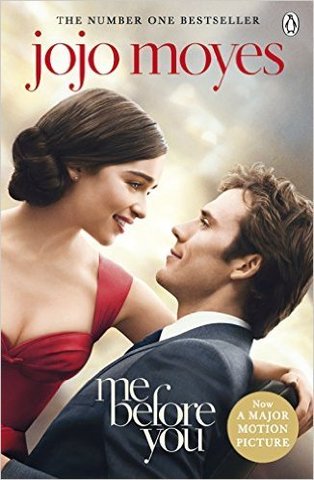 Operativ çatdırırıq: 24 saat ərzində * sürətli çatdırılma * poçtla * "Özün götür" xidməti ilə
Ödəniş etmək asandır: onlayn kartla * pos-terminalla * hissə-hissə * kuryerə nəğd * MilliÖn və E-Manat terminalları ilə
ISBN: 9780718181185
0Şərh əlavə et
THE NEW YORK TIMES NUMBER 1 BESTSELLING NOVEL THAT IS LOVED AROUND THE WORLD, AND NOW NO 1 BOX-OFFICE SMASH STARRING EMILIA CLARKE AND SAM CLAFLIN Lou Clark knows lots of things. She knows how many footsteps there are between the bus stop and home. She knows she likes working in The Buttered Bun tea shop and she knows she might not love her boyfriend Patrick. What Lou doesn't know is she's about to lose her job or that knowing what's coming is what keeps her sane. Will Traynor knows his motorcycle accident took away his desire to live. He knows everything feels very small and rather joyless now and he knows exactly how he's going to put a stop to that. What Will doesn't know is that Lou is about to burst into his world in a riot of colour. And neither of them knows they're going to change the other for all time. * AFTER YOU, THE SEQUEL TO ME BEFORE YOU, IS ALSO AVAILABLE TO BUY NOW * The Author Jojo Moyes is a novelist, journalist and screenwriter. She worked at the Independent for ten years before leaving to write full-time. Her previous novels have all been critically acclaimed and include Me Before You, The Girl You Left Behind and the Sunday Times number 1 bestselller The One Plus One. Me Before You has sold over 5 million copies worldwide and went to the top of the charts in 9 countries, including in Germany where it held the number 1 slot for 46 weeks. She is one of the few authors to have had 3 novels on the New York Timesbestseller list at the same time. A major film adaptation of Me Before You, starring Sam Clafin (The Hunger Games) and Emilia Clarke (Game of Thrones), is currently in production. Jojo lives in Essex with her husband and their three children. Praise for Me Before You 'Poignant ...heartfelt ...Me Before You, at it's heart, is about two people who properly listen to each other- it is something good' Independent on Sunday 'A compelling novel of life and death decisions and unlikely affections. It's magical and heartbreaking, but doesn't shy away from difficult emotional realities. Waterproof mascara essential' Marie Claire 'Destined to be the novel that friends press upon each other more than any other next year, it is a tremendous example of what commercial fiction can do when in the hands of an expert. Moyes does a majestic job of conjuring a cast of characters who are charismatic, credible and utterly compelling- Lou and Will are a couple who readers will take to their hearts as they did One Day's Emma and Dex' Independent 'When I finished this novel, I didn't want to review it: I wanted to reread it ...An affair to remember' Liesl Schillinger, The New York Times Book Review 'This truly beautiful story made us laugh, smile and sob like a baby - you simply have to read it ' Closer 'Heartbreaking, soul-searching and utterly compelling' Easy Living 'Compelling, moving and absorbing. It's also a real weepie' Daily Express 'Funny, believable and heartbreaking, this is sure to be the weepy of 2012' Woman's Own 'Poignant and beautifully written, this book will stay with you long after you've put it down' Star Magazine 'A compelling portrait of an unlikely couple' Independent 'Me Before You is a page-turner that sucks the reader into caring about the fate of the heroine ...By turns funny and moving but never predictable. The plot contains a number of surprises and raises thoughtful question' USA Today 'A perceptive and moving tale' Independent 'Funny, surprising and heartbreaking, populated with characters who are affecting and amusing ...This is a thought-provoking, thoroughly entertaining novel that captures the complexity of love' People 'Beautifully written' Sun 'Another powerful love story. A deftly plotted narrative populated with likeable engaging characters ...a bittersweet story about love, learning and letting go. It's a tremendous read and I loved it' Daily Mail 'Keep the tissues close as Jojo Moyes returns with Me Before You, a heartbreaking yet ultimately uplifting tale about the relationship between an embittered quadriplegic man and the carer who is trying to give him a reason to live' Good Housekeeping 'An unlikely love story ...To be devoured like candy, between tears' O, The Oprah Magazine 'Read it and weep: Heartbreak collides with humour in Jojo Moyes's Me Before You" Good Housekeeping USA 'At last, a new Moyes novel - and it's a triumph. Her story of love blossoming in the most unlikely of ways packs such an emotional punch, you'll need a box of tissues' Elle 'Jojo Moyes's poignantly romantic tales have readers streaming their way through boxes of Kleenex ...Me Before You is compelling reading...a profound, fundamental, thought-provoking conundrum lies at the heart of the story, a huge moral dilemma, explored with great fictional finesse. Devotees of Jojo Moyes and newcomers alike will settle into this entertaining book with gusto' Sunday Express 'Romantic, thought-provoking tear-jerker than you won't be able to put down' Woman & Home