Subliminal: The New Unconscious and What it Teaches Us 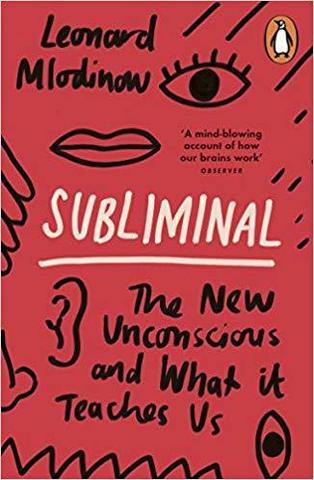 Leonard Mlodinow, the best-selling author of The Drunkard's Walk and coauthor of The Grand Design (with Stephen Hawking) and War of the Worldviews (with Deepak Chopra) here examines how the unconscious mind shapes our experience of the world, and how, for instance, we often misperceive everything from our relationships with family, friends and business associates, the reasons for our investment decisions, to our own past.
Your preference in politicians, the amount of tip you give the waiter-all our judgments and perceptions-reflect the workings of our mind on two levels, the conscious, of which we are aware, and the unconscious, which is hidden from us. The latter has long been the subject of speculation, but over the past two decades scientific researchers have developed remarkable new tools for probing the hidden, or subliminal, workings of the mind. The result of this explosion of research is a new science of the unconscious, and a sea change in our understanding of how the mind affects the way we live.
These cutting-edge discoveries have revealed that the way we experience life-our perception, behavior, memory, and social judgment-is largely driven by the mind's subliminal processes and not by the conscious ones, as we have long believed. Employing his trademark wit and his lucid, accessible explanations of the most obscure scientific subjects, Leonard Mlodinow takes us on a tour of this research, unraveling the complexities of the subliminal self, increasing our understanding of how the human mind works, and how we interact with friends, strangers, spouses and coworkers. In the process he changes our view of ourselves and the world around us.
Leonard Mlodinow received his PhD in theoretical physics from the University of California, Berkeley, was an Alexander von Humboldt Fellow at the Max Planck Institute, and now teaches at the California Institute of Technology. His previous books include War of the Worldviews (with Deepak Chopra); the two national best sellers The Grand Design (with Stephen Hawking) and The Drunkard's Walk (a New York Times Notable Book and short-listed for the Royal Society Prize for Science Books); Feynman's Rainbow; and Euclid's Window. He also wrote for the television series MacGyver and Star Trek: The Next Generation.