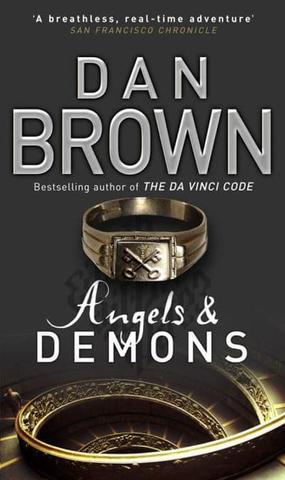 Angels and Demons is a fast paced thriller by Dan Brown that is set against the backdrop of the Catholic Church and the Vatican.
Angels and Demons can be considered a prequel to The Da Vinci Code as Robert Langdon, the Harvard Professor and expert on religious symbolism and art history, is introduced in this book.
Angels and Demons starts with a phone call to Langdon from the Director of CERN. One of their top physicists is found murdered, with the word Illuminati branded across his chest. As Langdon is known to be an expert on the Illuminati, he is contacted.
The murdered physicist, Leonardo Vetra, is an interesting personality. He is a catholic priest as well as a high profile physicist. He also has an adopted daughter, Vittoria, who is a physicist too. Vittoria and her father were using the largest particle accelerator in the world to create and isolate antimatter.
The antimatter is sealed in canisters that are suspended in an electrical system, to prevent them from interacting with matter. The canisters are provided with 24-hour battery backup. If the canisters are removed from the main electrical system, the battery backup will still isolate the contents from the surrounding matter for 24 hours. After that, matter and antimatter will meet in a mutually destructive collision that could unleash an explosion of huge destructive power.
One of the canisters is missing and it is soon clear that it is in the hands of the Illuminati. The Illuminati are an ancient secret society, a society that was long thought to be dead. The Illuminati have only one aim-the total destruction of the Catholic Church, their bitterest enemy.
Meanwhile, the Vatican is getting ready to elect a new Pope. The cardinals of the Catholic Church are gathering in Vatican City for this purpose, but the four candidates chosen as likely successors are missing.
Robert Langdon and Vittoria set off on a race against time, uncovering clues through symbolic significance. Langdon has to use all his expertise to track down these clues and find the canister before its destructive power is unleashed.